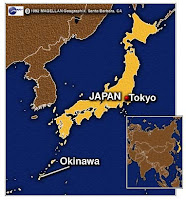 No. Not the red dot. Down and to the left: Okinawa. She's a Marine wife who talked her husband into doing an overseas tour. Me, I've moved all over these United States in the name of the Marine Corps...but I've never got to live in a place where I didn't speak the language (except Bah-ston. But that's because they're doing it wrong. It's PEA-body, not Peabdy. JERKS.).

Whateva. The wonderful thing about being part of the Marine Corps family? Going to visit friends all over the world. When my friend moved, I told her that was DEFINITELY going to come and visit, because who wouldn't want to go visit a friend whose casa es mi casa all the way in Japan? (Gimme a break. I speak Spanish, y'all. I don't know how to say "my house is your house" in Japanese)

COMPLETELY UNRELATED SIDENOTE: Have I ever mentioned The Brat's boner for ALL THINGS JAPANESE? Because she's got one. A big huge one. She listens to J-pop (and K-pop) watches anime in japanese. She decided in middle school that she wanted to learn japanese. EVEN when it involved taking a class at 7AM. And considering that she’d rather sleep until noon than eat, that's dedication. And? She’s REALLY good. And I'm not just saying that because I'm her mom and she's better than your kid at EVERYTHING. She's pretty bad ass. When she found out that I was going to go visit my friend in Okinawa, she said that I was either going to take her, or she was going to set all of my clothes on fire   hide in my suitcase.

So there I was, looking for tourist traps attractions for The Brat and me. My friend has already said she'll be taking that time off, so that she can be our tour guide.  You know how you start looking for stuff and then you just follow the random links and then you end up somewhere interesting that you didn't even know you wanted to be until you saw THAT. Guess what THAT was y'all? THAT was Disneyland in TOKYO.

YOU GUYS? I COMPLETELY FORGOT THAT THERE WAS A DISNEYLAND IN JAPAN.*

So NOW, I'm detouring to Tokyo where we're going to Disneyland with a side of Harajuku, and maybe I can even sneak in some culture and shit.


*I haven't even been to Disneyland in California in YEARS, but OMG, there is no way I'm not going to Disneyland in another fucking country. Also? Now that I remembered that there are Disneylands all over the world, I'm adding Disneyland Paris and Hong Kong to my list. BOO-YAH!!

** And, yes. I asked The Man did he want to go. His response: I've already been to Okinawa and I never want to go back. Have fun. Take pictures.
Posted by Briya at 1:53 AM 7 comments: