A post about my husband, drunk sex and a missing cat

So I got this joke in the mail. It's pretty hilarious. I could have just e-mailed it out to eleventy-billion of y'all, but then I was all that's why I have blog space. And it's Saturday, and everyone knows that nobody is reading blogs on Saturday, so I can pretty much post whatever the fuck I want to. So I am.


It could be that this joke is *really* that funny, or that I just have a weird sense of humor (I have 2 baby cats, and I can't even imagine acting like this), OR It might just be me being too lazy to write a WHOLE post about how my husband came home super drunk the other night and decided that RIGHT NOW would be the perfect time to have sex, while I completely and unironically was watching the movie Stick It! (which even though sounds like it could be, is NOT porn) and then he passed out, and then this morning he was dragging ass because OMG he was up drinking instead of home sleeping like normal people do. And then when I was poking at him because HEY GET UP, YOU GOTTA GO TO WORK, he made some snide remark about this one time where I went out with my friend and HER friends and one of them thought it would be a good idea to buy us a bajillion car bombs,and shots of tequila AND a Toyko Tea on a fucking Wednesday night, and I apparently thought it would be a good idea to drink them. I got so drunk that I don't even remember getting home (I didn't drive) after midnight, I got up at 5-something in the morning to go to work still not completely sober, in fact, water made it worse, until I wised up and got some Gatorade in me. And when he called me and I told him about the previous night and how all I could do is pray I can finish out this day so that I can go home and pass out, he laughed at me...but I SHOULD HAVE SOME FUCKING SYMPATHY because he's SOOO tired.


So I'm going to make a long story even longer by saying, please to enjoy this joke instead of the above post that's not a post.

Shannon* (the secretary) has lost her cat and has asked David (the graphic designer) to help with a lost poster. This is their email correspondence...


I opened the screen door yesterday and my cat got out and has been missing since then so I was wondering if you are not too busy you could make a poster for me. It has to be A4 and I will photocopy it and put it around my suburb this afternoon. 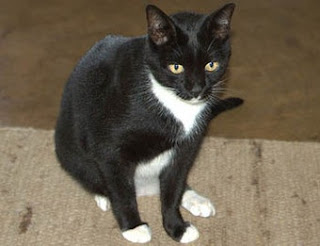 This is the only photo of her I have she answers to the name Missy and is black and white and about 8 months old. missing on Harper street and my phone number.


That is shocking news.


Although I have two clients expecting completed work this afternoon, I will, of course, drop everything and do whatever it takes to facilitate the speedy return of Missy.


yeah ok thanks. I know you dont like cats but I am really worried about mine. I have to leave at 1pm today.


I never said I don't like cats. Attached poster as requested. 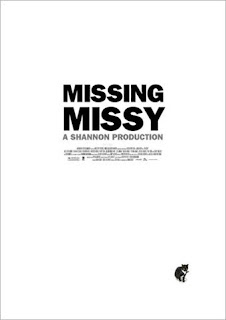 yeah thats not what I was looking for at all. it looks like a movie and how come the photo of Missy is so small?


It's a design thing. The cat is lost in the negative space.


Thats just stupid. Can you do it properly please? I am extremely emotional over this and was up all night in tears. you seem to think it is funny. Can you make the photo bigger please and fix the text and do it in color please. Thanks.


Having worked with designers for a few years now, I would have assumed you understood, despite our vague suggestions otherwise, we do not welcome constructive criticism. I don't come downstairs and tell you how to send text messages, log onto Facebook and look out of the window. I have amended and attached the poster as per your instructions. 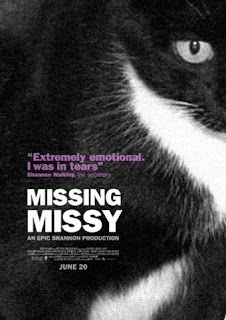 This is worse than the other one. can you make it so it shows the whole photo of Missy and delete the stupid text that says missing missy off it? I just want it to say Lost. 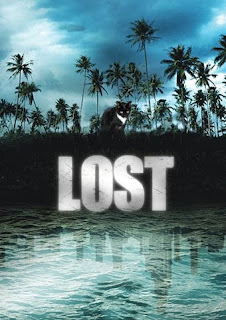 
yeah can you do the poster or not? I just want a photo and the word lost and the telephone number and when and where she was lost and her name. Not like a movie poster or anything stupid. I have to leave early today. If it was your cat I would help you. Thanks.


I don't have a cat. I once agreed to look after a friend's cat for a week but after he dropped it off at my apartment and explained the concept of kitty litter. I have attached the amended version of your poster as per your detailed instructions. 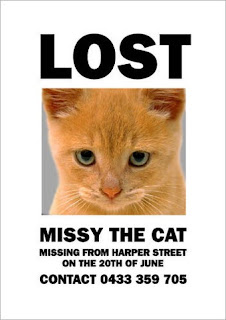 Thats not my cat. where did you get that picture from? That cat is orange. I gave you a photo of my cat.

I know, but that one is cute. As Missy has quite possibly met any one of several violent ends, it is possible you might get a better cat out of this. If anybody calls and says "I haven't seen your orange cat but I did find a black and white one with its hind legs run over by a car, do you want it?" you can politely decline and save yourself a costly veterinarian bill.


Please just use the photo I gave you. 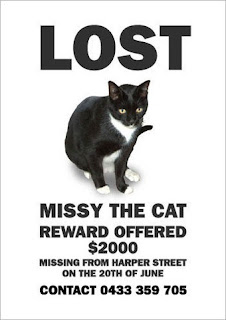 I didnt say there was a reward. I dont have $2000 dollars. What did you even put that there for? Apart from that it is perfect can you please remove the reward bit. Thanks Shan. 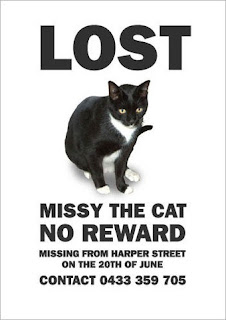 
Can you just please take the reward bit off altogether? I have to leave in ten minutes and I still have to make photocopies of it. 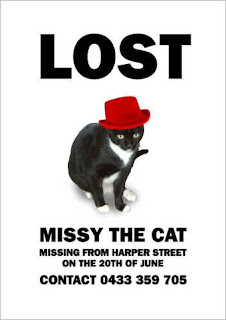 Fine. That will have to do.

*Am I the only one? Or do you have a co-worker JUST LIKE HER at your job too?


It was my first solo trip. Me and the boy were going to visit the boyfriend/baby daddy. He was stationed at Kaneohe Bay in Oahu. He’d been there for about a year, and I had been DYING to go visit and get laid lei’d. (To-may-to..To-mah-to)

I had taken time off work, I was going to stay with a couple he knew who had a small apartment in Honolulu. Seven days. I was going to go to the beach, see the sights, and go to a Hula show. He was going to take leave, so we could do all that and whatever else we could squeeze in during my time there.

I was excited. And nervous. I was going to take a 5 hour flight with a 2 year old. Alone.

He was there to meet us when we got off the plane (Do you know how long ago it was when you could be standing at the gate to hug people as soon as deplaned? A LIFETIME ago. Damn! I’m old). He drove us around in his friend’s car, took me to the base to introduce me to his friends. We went out for dinner. Sizzler, because we’re fancy like that.

We did a shitload of sight-seeing. I went to an awesome hula show. I went to the mall and rode a tram (because the mall is THAT BIG). We shopped at the flea market, and ate shave ice. I bought a coconut bra. I was having so much fun, I didn’t want to go home.

Then, I missed my flight. I came back to my room, and made a few phone calls.

And then I missed my flight again.

After I finished cussing because dammit I need to get back to California asshole, I have a job and SHIT TO DO there I can’t keep missing my flight because you can’t get me to the fucking airport on time, he asked me to marry him.


18 years ago this afternoon, I stood on Waimea Beach and married the boy I have been in love with since I was 16 years old. I love you from the boy who used to get into fist fights (before/during) after school to the man who fought wars. 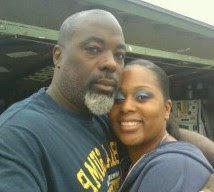 Labels: back in the day, Because I had to say something, LOVE AND MARRIAGE

Blogher10 Recap...or How to Drive Housekeeping Crazy. You decide.

Yes. I did go to blogher10. I had fun, I met a lot of new people, and a few people that I should see more often because WE ALL LIVE IN SOUTHERN CALIFORNIA, GUYS. WHY DON'T I SEE MORE OF YOU?

I could go on and on about how much fun I had, how weird it was to fly to New York to meet a bunch of people who mostly live inside my computer,  and how much sight-seeing I did (related: how much walking I did. You NY people are some walking mf'ers), and how I can’t WAIT for Blogher11 in San Diego which is down the highway a bit, but still close. But I’m not. I’m going to tell you a story about how to torture housekeeping. 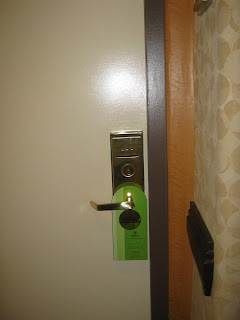 Do Not Disturb. Please and Thank You

It started off simply enough, we got in on Wednesday, flopped down on the beds of our choice and unpacked. As I’m sure you know, 4 bloggers + 4 ½ days = a whole lot of STUFF. There were laptops, cameras, phones and SHOES. THERE WERE A LOT OF SHOES. Instead of locking up our stuff in the itty bitty safe, we decided to skip housekeeping. Throw on the Do Not Disturb, sign. No big deal. We’ll just change out the towels (because NYC in August means that we were taking at least 2 showers a day)

The next day as we were getting ready to step out of our rooms housekeeping was RIGHT THERE. You guys need housekeeping? Oh, no thanks. Just towels. Well, we’ll come in and…. No. We’ll bring them out.

And then it became a game.

about how my daughter is growing up. It's a moving tale of The Brat and Taylor Lautner's abs. Please to enjoy.
Posted by Briya at 11:17 AM No comments: