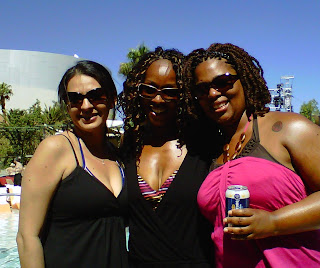 talk my girl friend into taking a day off to spend with me at Ditch Friday at the Palms Pool in Las Vegas.

pack too many clothes.

go to Lush and stock up on bath bombs...

let somebody give me tequila that had been smuggled down to the pool in a Bud Light can AFTER he took a shot first (I'm crazy y'all...not stupid).
send drunk texts to @undomesticdiva. Because she likes it.
take a picture of a guy's tattoo that looks suspiciously like a penis.
have a blast at Haze with @justonemiss @rewritingkel and the birthday girl: @redlotusmama
buy a shot for a Marine. Related: I also took a picture of his tattoo, because it was badass (he was Suicide Charley and you have to be a Marine to understand), and then sent that picture to The Man.
hug an Soldier who had just gotten back from Iraq.
NOT play any craps. (Boo!)
lose my money at the roulette table.
do a loud ghetto laugh just as the plane got silent.
NOT wear make-up to the pool.Waterproof mascara does not count.
break both of @sistuhgurl's flip flops at the same time. Damn, I'm clumsy. Related: I *did* get a guy to fix them for me.
find out who took the picture of me and Santa from the original #VegasBB
photobomb some pictures.
laugh a lot this weekend
wish some of you were there... <3 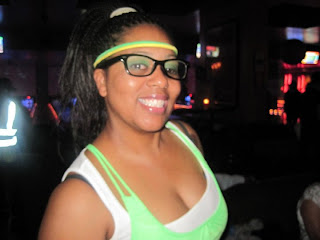 80's night for opening of Hot Tub Time Machine
Yeah, I know. It's hard to believe I'm a parent.
So from time to time I have to remind my mother that HEY. I’M THE DAMN MOTHER HERE.

And you can’t be a better to my kid than me. Like this one time

I moved to Boston in December of 2001. I worked at a Big Fancy Hospital (just like the one I work in now…only on the east coast) in Boston. Right across from Fenway Park (Boo, Red Sox!).


I took the subway to work because for all California has to brag about, our public transportation leaves a LOT to be desired. I took a shuttle to T station, grabbed a Metro and just barely made my train. The Metro is just a little paper that you read while you kill time on the subway. In fact, I usually breezed through it, and left it in the seat when I got out, so that someone else could read it until their stop. I sat down, and looked at the front page.

On the front page was a picture of every person on the 2 flights that left from Logan Airport in Boston, Mass.

(unrelated: You know what’s really UNCOMFORTABLE for subway riders? Watching a woman bawl while reading the Metro. I mean, complete with runny nose and that hiccup and nowhere to blow your nose because you totally did not expect to be crying hysterically at 7AM on your way in to work. Not that this ever happened to me or anything…I’m just saying)

It had only been a year.

I read the Metro from front to back, reading stories about innocent people who had no idea their lives were going to be sacrificed simply because of others who hate. Students, parents, kids, people who were just coming back from vacation, not just Americans. This one day changed so many lives.

And even as people swear to always remember, people forget.

But I will never be one of those people. And I will make sure that my children remember. Too much of my life, and the lives of those close to me, has changed based on one single horrifying day. 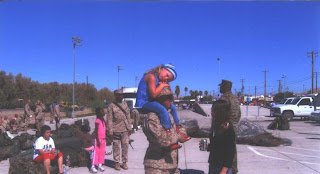 The Man & Brat before he deployed. The FIRST TIME.

It will always be in the back of my mind, as the wife of a husband who has done several deployments, as a person who watched the news unbelieving just like everyone else, as a person whose heart still hurts for all of those people who died on that day, and the military personnel that give their lives to fight for our freedoms (whether or not *you* agree with them).

Labels: Because I had to say something
Newer Posts Older Posts Home
Subscribe to: Posts (Atom)